While I have some "health issues" and quite a bit of painting to do before I will be ready to start, I have some thoughts on my upcoming "Stagonian Wars" mini-Campaign between our pragmatic Kingdom of Stagonia and those hapless "do-gooders", the Principality of Saxe-Bearstein.

Each Imagi-Nation will start the campaign with the same resources:
Note that each of the "regular infantry battalions will include one company of grenadiers . . . and all of the grenadiers within a brigade may (but do not have to) be separated into a separate "combined grenadier" battalion.

There will be three "morale grades" (Superior, Veteran and Poor) . . . and they shall be distributed as follows:
* Note that the two "Irregular Infantry" Battalions need to be of different morale grades . . . as do the two "Hussar" Regiments.  Furthermore, both the Heavy Horse and Dragoons must each have at least one of each of the three morale grades amongst them.

All units will be randomly selected before each battle . . . so the Generals will have to decide just how to use them.

In addition, each army will have some artillery and a list of Generals and Brigadiers.  All Officers (like the units) will be randomly diced for before each battle . . . so the C-in-C of each side will have to decide how to best use them . . . because, of course, each one has a "Personality" and various strengths and weaknesses.

Right now I am thinking about having "Guest Generals" in the same way in which "The Alpian Wars" have enjoyed them . . . so that I won't know just how each C-in-C will configure his Officers and Troops, nor his Battle Plan ahead of time.

Unlike the "Victory Without Quarter" rules used for "The Alpian Wars", the Action Deck will not include individual units, but only cards for the various Officers . . . with those will higher "Initiatives" having more cards in the Deck.

As for casualties.  Any "company" that only has partial casualties will automatically be available for the next battle.  Companies (or individuals for Skirmishing Foot) that have been "lost" will have a 50% chance of returning in time for the next battle.  Companies that have not been recovered will have a 50% chance of "returning" each battle that they "sit out" . . . so it behooves the C-in-Cs to pay attention to their casualties.

Currently I am considering which of the "Mini-Campaigns" (see link at top of side bar) I will try first.

King Ludwig of Stagonia was reading old records when he came across the accounts of a battle fought two centuries earlier.

Reading the account he chortled with delight . . . what a vile trick to play on an enemies best regiment.


Posted by vile Stagonian at 11:38 PM No comments:

While I am pretty much sidelined with my chemotherapy treatments for the next six months, I have decided to try to run a solo mini-campaign between "The Kingdom of Stagonia" and their traditional rival, "The Principality of Saxe-Bearstein" as indicated on the latter's blog.

One of the major purposes (besides keeping me somewhat engaged with something I enjoy -- the chemo is really knocking the stuffing out of me) is to generate stories.

I will be using a very highly stripped-down and modified version of Ross Macfarlane's "Hearts of Tin" rules (click to get latest version of Ross' rules).  But since I do want to generate stories, I will also be using his optional rules for "Non-Player Commanders" . . . and adding my own tweak to it with "protogees".

Each Imagi-Nation will have 3 generals and 6 brigadiers available during the campaign.  Who is at any particular battle will be determined via die rolls.  In addition, each of the three generals will have a "protegee" . . . again determined by die rolls . . . whom he will favor with his better troops should he be at that battle.

The actual "character" of generals and protege's will be diced for the first time they take the field . . . which will not alter the protege status (he might be a relative after all).  Below are the names of the Stagonian command officers:

Generals:
Brigadiers:
By the way, the mini-campaign will be that developed by "Dr. Vesuvius" of "The Axis of Naughtiness" blog using scenarios from Charles Steward Grant's "Programmed Wargames Scenarios".  Campaign can be found here.

More to come when I have the energy to type it.

King Ludwig was going through some old records when he came across an account of a Stagonian raid into the Duchy of the North. (It should be noted that the king did not think of his nation as "vile" . . . one of the ways in which he is almost unique).

He carefully opened the report and began to read . . . .

. . . (Translation . . . we will be fighting a battle this coming Sunday using Clarence Harrison's "Victory Without Quarter" rules for the ECW. However, since I don't have any ECW figures, I will be using late Renaissance figures and we will place the battle in the early-mid 17th century. An account will follow next week.)

Oh, the Vilest of Schemes is Afoot

"So, my dear, does that imbecile of a Grand Duke have any idea?"

"No, my Love, my agents report that he dotes on that little snuff box. Further, that he insisted on holding it in his portrait so that it is quite visible . . . and we made sure that several Zichenauers viewed the portrait."

"And now they are invading! How delightfully devious your are, my dear Duchess."

"Indeed, my sweet, and now this will facilitate your plans, won't it."

"Most vilely, Love. Most very vilely."

"The reports are confirmed, Your Majesty. Zichenauer is massing troops on the Stollenian border."

"Good, very good. And I presume that that fool, the Grand Duke Irwin-Amadeus, will mass his entire army to face them."

"One would presume so, Sire."

"Indeed. Inform my generals that I wish to see them. There is an opportunity here for . . . . "

"For what, Your Majesty?"

Posted by Stagonian Jeff at 2:00 AM 8 comments: 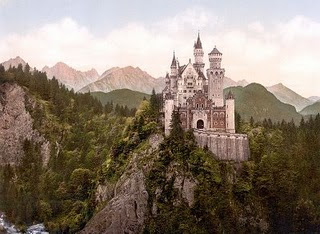 In the depths of Stagonia's vile Nochtswan Castle (pictured at left -- click for a larger image), Ludwig du Vile, the young king of Stagonia, cursed the holidays.

"Why are the peasants so joyful because of this "Christmas" nonsense?"

"I need to find out. Go, get me a dozen or so assorted peasants. I'll torture them on my new 'Stollen rack'. " (at his words, some of his vile courtiers left to fetch the required peasants). 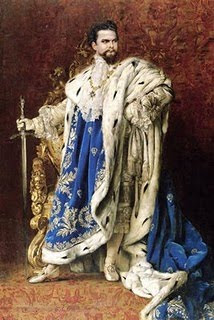 Giggling, the mad monarch (seen at left) continued, "Wouldn't Irwin Amadeus be furious if he knew to what purpose I've put his precious timbers?"

Now alone, Koenig Ludwig mused about his future plans. Where would his mighty troops strike next?

"I could strike Stollen again. The Elector of Zichenau has been after me to coordinate something vile like last year. I could attack Frankszonia but there are all of those Gallian troops nearby. "

"Let me see, Wittenberg is rather weak right now, perhaps I should hit them? Or what about . . . yes, that might be a very nasty move."

Grinning from ear to ear, his vileness mused, "Why Christmas IS a wonderful time . . . it gives me such ideas." But before he could complete his thoughts, his courtiers returned with the peasants he would torture.
Posted by Stagonian Jeff at 10:26 PM 6 comments: